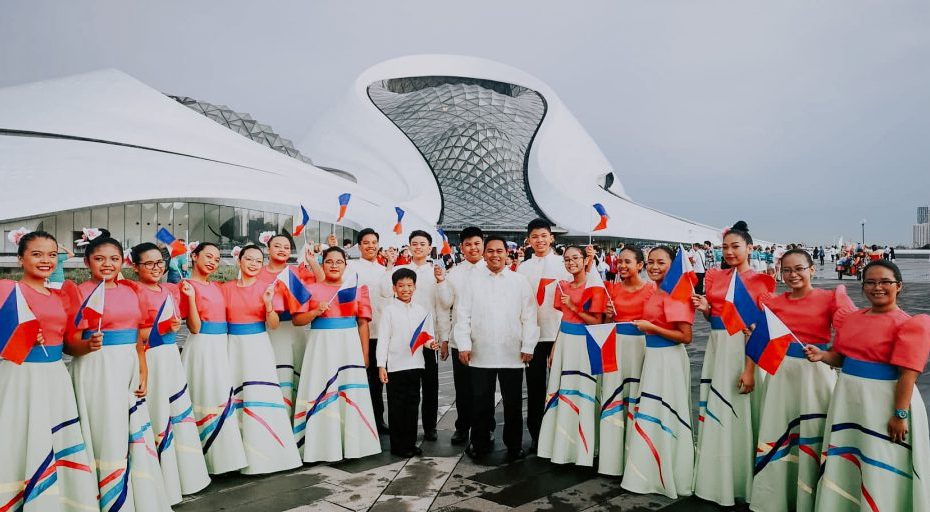 During the event, the choir sang the well-loved Filipino folk songs “Paru-parong Bukid” and “Pinpin de Sarapin” as their competition pieces. In relation to the festival, they sang the Filipino folk song “Osoy Osoy”, “The Circle of Life” from the Lion King, and a Mandarin folk song, “Ai Hai Yo”.

Organized in 2014, the Falsettos is composed of both grade school and high school students from the Pueblo de Oro campus. The award-winning choir is conducted by the grade school Music teacher, Sir Paul Tiburtius F. Salipong. Teacher Ma. Theresa L. Pakino is the choir’s choreographer and drillmaster.

With the support of the Sister Cities Program of the Cagayan de Oro City government, the choir was chosen to participate in the international competition under the leadership of Teacher Ofelia L. Dunay, CCS Pueblo de Oro Campus Assistant Principal.

Long before joining the international scene, the Falsettos have joined and have won in local competitions. Their first foray in choral competitions earned them second place in the Bangga sa Daygon, a Christmas caroling contest for elementary school level chorales of Cagayan de Oro, in December 2014. After that win, there was no looking back! The group held the “crown” as champion in Bangga sa Daygon for the next three years. The Falsettos also reached the finals in the Manila Broadcasting Company’s choir competition and the National Music Competitions for Young Artists (NAMCYA).

The Falsettos’ silver medal finish followed a few of the country’s big wins in choral competitions such as the Albay High School Choir’s championship titles in Spain and the Cordillera High School Glee Club’s gold medals in Indonesia.

Indeed, our very own school choir has made the Corpus Christi School banner fly high in the international scene!